David lays down an MFG beat the Jim White way! This is how I tracked the kick and snare for "Punk Rock For Breakfast". For a fun party game (once you buy my album), see if you can tell which songs have 100% acoustic drums, which have 100% electronic drums, and which are hybrids... By the way, David was triggering very Prince-like kick and snare sounds. "I never meant to cause you any sorrow..."
Posted by J-Dub at 7:07 PM No comments: 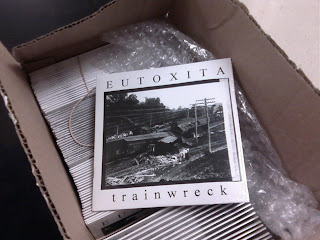 Cut two more tracks with Floodwatch tonight. The drums and bass are keepers. This is a clip of David laying down a scratch vocal. Floodwatch continues to be the easiest, most free-flowing band experience ever.
Posted by J-Dub at 10:44 PM No comments:

"Charging an army, while / All the world wonder'd"

I haven't done an actual online post in a while. I'm just waiting for some random Internet junky to point out that the last few are more twittering than blogging. Oh, wait... only two people read this...

Anywho (really?), I'm eagerly awaiting trainwreck. I'm somewhat annoyed with the duplicator. Apparently, I missed the part where they told you that "orders like mine" (read: small money) don't warrant individual attention. The only way I've gotten info is to pester. Even that uncovered the fact that they thought they had been sending me e-mail updates, but hadn't. Can't a brother get a little attention for three Benjamins? At any rate, I'm hoping to see a box of disks SOON.

In the meantime, fearless readers will know that I've signed up for the RPM Challenge again. I think I've also convinced my brother to sign up as an artist, and I'm hoping Lees will as well. The Army of Dorkness, er... Darkness is growing... MWAHAHAHAHAHA!!!

Over the last couple of days, I've been tying up my gf's bandwidth downloading a DVD-quality version of Nosferatu. I have a DVD already, but it's a bit sketchy, according to the experts. The first red flag was that it's about an hour long, while the original film clocks in around an hour and a half. Of course, the original original has yet to be fully realized. Apparently, text slides were removed and lost, some sections of the film are supposed to be tinted, etc. This is all because Bram Stoker's estate sued Prana Film and the court ordered all copies destroyed. Yikes.

My plan is this: I will improvise a score on my digital piano while watching the film from start to finish, a la Neil Young's Deadman soundtrack. Once I have this musical road map down, I'll go back and add what needs to be added--upright bass (arco, most likely... the Voice of the Abyss), guitar(s), possibly drums, synth, dijeridoo... whatever. At some point, I'll chop off hunks that call for David's voice and drop them to disc. Then he'll give 'em the MFG treatment, listening and singing in his truck on his way back and forth to work. I might pull my bro in for some Floydian guitar touches. Who knows? Other than broad brush strokes, I have no intention of locking it in ahead of time. The singing will be wordless, although I am toying with the idea of doing the ubiquitous Hollywood end-credits song.

Band #3. Please, Odin, let my eardrums burst before I must endure any more. P.S. 1989 called and it wants its speed metal back. Ride the lightning. Ride it.
Posted by J-Dub at 11:22 PM No comments: 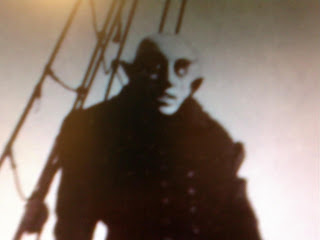 Cool news... Had an MFG listening session with David last night. I told him about the RPM Challenge and he signed on to add vocalizations to the soundtrack. In the words of Mr. Burns (and Wayne)... Excellent...
Posted by J-Dub at 2:50 PM No comments: 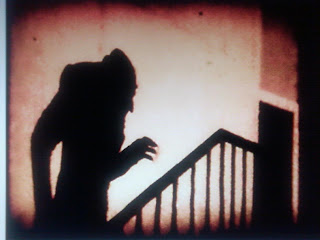 Since trainwreck is "in the can" I have signed up for the RPM Challenge. I was part of the first RPM with TCD, then again on my own as James Blanco. This time, EUTOXITA will score the silent film Nosferatu. Stay tuned...
Posted by J-Dub at 9:35 PM No comments:

The Train(wreck) Has Left The Station... maybe... 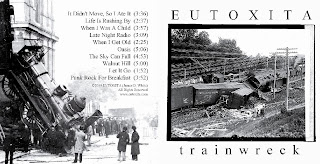 As of 3:17 PM this afternoon, I have officially uploaded the CD master and Photoshop graphics files for the eagerly-awaited (well...) first-ever EUTOXITA album, trainwreck.

I will post when I have an anticipated availability date. 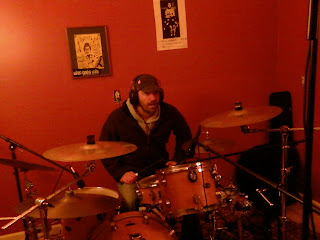 Charlie behind the kit, ready to bust phat beats on the preproduction demos for the new Floodwatch record. Charlie's studio looks great, but lacks the ever-present laundry piles that charm up my studio.
Posted by J-Dub at 10:45 AM No comments: 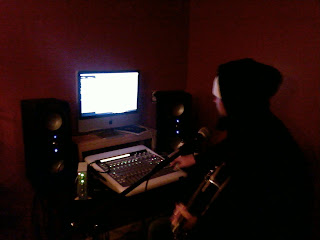 David manning Charlie's ProTools rig.
Posted by J-Dub at 10:41 AM No comments: 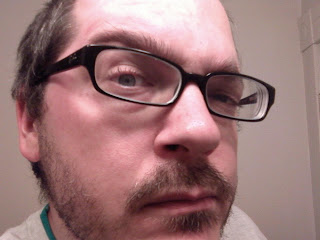 Still deciding on duplication & distribution options. In the meantime... started writing for the next album... (And I know--Alan Parsons called & he wants his beard & glasses back...).
Posted by J-Dub at 11:35 PM No comments: